Bollywood actor Tiger Shroff took to his Instagram to praise his rumoured girlfriend Disha Patani’s trailer of her upcoming movie Radhe: Your Most Wanted Bhai. The Heropanti actor shared a still of Disha from the trailer and praised her looks. Read on. 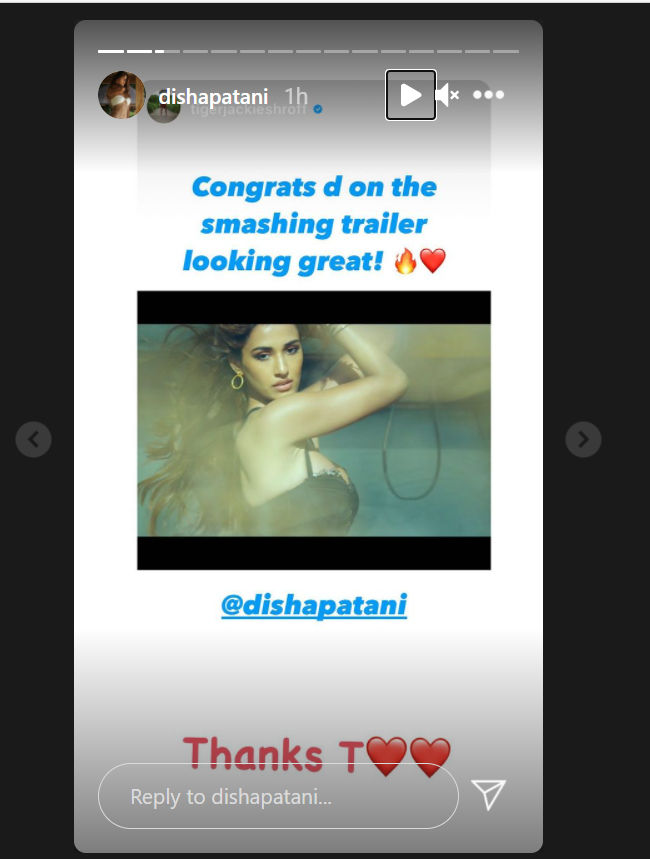 Tiger Shroff’s girlfriend Disha Patani will soon be seen in the action movie Radhe: Your Most Wanted Bhai. The trailer of the movie was recently released and Tiger took to his Instagram to praise his rumoured girlfriend’s performance and looks in the trailer.

The actor shared Disha’s picture and wrote, “Congrats d on smashing the trailer looking good” with heart emoticons. The actress also reposted the story on her Insta and wrote: “Thanks T”. The movie also features Tiger Shroff’s father Jackie Shroff in a pivotal role. The duo has been fueling dating rumours for quite some time, but neither of them has confirmed their relationship in public.


Disha Patani is all set to star in the action flick Radhe. The movie also features actors like Salman Khan, Pravessh Rana, Randeep Hooda and Jackie Shroff in lead roles.

The movie is directed by Prabhu Deva and follows the story of ACP Rajveer Shikawat aka Radhe who goes on a manhunt to find the wealthiest man in the town secretly running a crime syndicate. The movie is set to release on May 13, 2021.


Tiger Shroff will next be seen in Sajid Nadiadwala’s action movie Heropanti 2. The movie is a sequel to the 2014 movie Heropanti. He shared the first look of his movie through his Instagram.

Tiger made his debut in Bollywood with the movie Heropanti alongside Kriti Sanon in the lead role. He was next seen in the 2016 action movie Baaghi opposite Shraddha Kapoor in the lead role.

Tiger played the role of Ronnie, a martial arts champion who goes to save his ex-girlfriend Sia after she gets kidnapped by a goon. The actor then went on to feature in various movies like Baaghi 2, A Flying Jatt, Munna Michael, Student of the Year 2, War and Baaghi 3.

Related Topics:Tiger Shroff
Up Next

Jennifer Joanna Aniston Collapses With Tiredness On Her Desk__See Details.